I went to Master Sgt. Davy Nathaniel Weaver's funeral today. He was 39 and had three children. He'd served 21 years in the Army, and he volunteered to do an extra three months this year in Afghanistan.

Turned out, that's what killed him. An IED exploded near his vehicle May 18, killing him and an interpreter, whose name I'm sorry to say I did not ask. They buried Sgt. Weaver today outside Lilla Memorial Baptist Church, which is just north of Barnesville.

I don't know how many funerals I've been to now for soldiers, the ones I never met and the one who was my friend. Enough to know I don't want to go to any more.

But you meet some amazing people at these funerals. Jan Johnson lost her son, Joshua, in 2004. Now she's one of those Patriot Guard Riders. I think she hugged every National Guardsman she saw today. 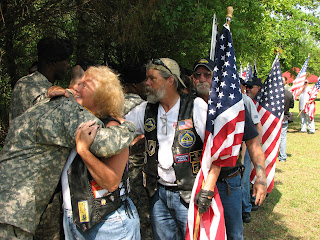 And the Weaver family - after the funeral was over they waited for his body to be lowered into the grave. Then they grabbed shovels and started filling in the dirt. One of his cousins told me that's a family tradition. I think it's a good one. 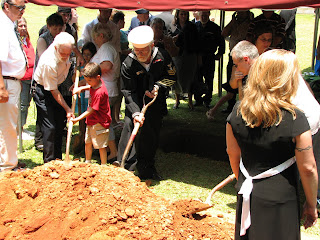 I don't know what else to say. Some members of Sgt. Weaver's family sang a song called "I'll Fly Away" during the service. They said he's in Heaven now, and they'll see him soon.

David Ching has posted some photos of Coach Richt and company's trip to the Middle East. They were taken by University of Auburn photographer Todd Van Emst. 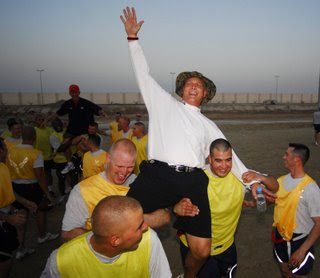 Labels: stealing from other blogs, The Dawgs, things that are pretty cool

Posted by Lucid Idiocy at 1:33 AM No comments:

There's a new restaurant in Macon called The Blue Oyster Buffet. If that name sounds familiar, this is probably why:

Intrepid reporter that I am, I called The Blue Oyster Buffet and asked if their name is a play on the "restaurant" of basically the same name from The Police Academy movies.

"Totally unrelated," the guy said. I didn't have the heart to ask his name. He did say he was aware of the similarity.

I should call back and ask how their salad bar is.
Posted by Lucid Idiocy at 2:07 PM 1 comment:

Are there sports we don't dominate in this spring?

Labels: The Dawgs, things that are completely dominant

I took this picture somewhere west of Milledgeville today. 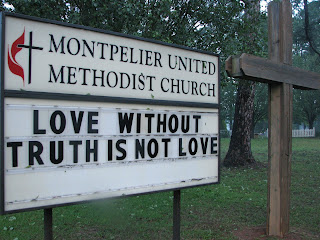 Posted by Lucid Idiocy at 11:09 PM No comments:

For the first two nights following last Sunday's storms, south Macon was dark. No power, no people on the street to speak of, just eerie. One of our reporters spent both nights out with the cops.

And this is what he saw.

There was a half moon. You could see the stars.

On a hillside in an old Home Depot parking lot, dozens of police officers braced for the unknowns of urban emptiness.

There was nervous chatter. Would there be looters, chaos, the darker it got?

One bluecoat broke the tension.

A woman rode up wanting to know where to go for candles. Another came searching for a place to sleep.

Across Pio Nono Avenue, the Krispy Kreme, for ages an around-the-clock beacon, sat darker than an old pot of Sanka.

Even the Waffle Houses were closed.

Yet there was a serenity reminiscent of Christmas mornings before daybreak. Just with anxiety getting the better of anticipation.

The evening took on the lonely aura of coastline after a hurricane, of a night in the wilderness with no campfire.

Macon had been sent to bed early.

Would it stay tucked in?

Posted by Lucid Idiocy at 9:58 PM No comments:

A song of you

On the off chance this isn't clear.


The whole day through, my friends.
Posted by Lucid Idiocy at 2:01 AM 1 comment:

I held the door until it passed. And, then, was left with this.

This was shot near the Bibb/Twiggs county line the other day, in the wake of a tornado.

The local Special Olympics group lost its boats in the tornado.

We may not be flying straight, but we are still flying

I finally got a chance to see some of the damage in Macon for myself. It's bad, but it could be a lot worse. A lot of people with trees in their houses out there. Big ones.

Lucky, considering what happened in the midwest and Arkansas last week, to say nothing of Myanmar a week ago and China today. Still, a lot of folks hurting out there. 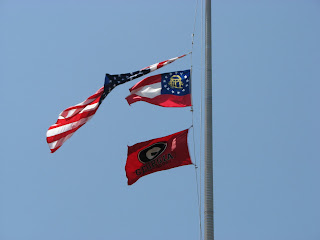 Posted by Lucid Idiocy at 2:20 PM No comments:

No, the other kind.


Some body must change.

Traffic. Also the other kind.


From the profit he's made on your dreams.
Posted by Lucid Idiocy at 11:51 AM 1 comment:

And made clever remarks throughout to boot.

There are others. I don't have the stomach to link them.
Posted by Lucid Idiocy at 11:10 PM No comments:

That could have paid someone to kill Steve Spurrier

Is there anyone here who thinks University of Georgia President Michael Adams, or any of the people he's likely to invite on a trip, would need a daily per diem to afford their meals?

The athletic association paid for their hotel room and valet parking, gave guests and their spouses each a per diem for meals and paid for their travel to New Orleans and back via a mileage equation.

For those who stayed four days and three nights, that came to an average of $1,632.39 per guest.

Of course I have no problem with anything paid to Coach Richt. Or with the university picking up hotel costs and traveling tabs for certain guests. But per diems? Jeebus.
Posted by Lucid Idiocy at 12:58 AM 1 comment:

Labels: all morons hate it when you call them a moron, The Dawgs, the rare double post


We didn't get on, remember?
Posted by Lucid Idiocy at 5:52 PM No comments:

Labels: the internet and the fall of society, video

The problem with this is it will lead smokers to hide and smoke anyway. And where's the best place to hide in Sanford?

If I can go all journalism on you for a moment, Danny's blog about the female impersonator story that was assigned but never ran in the paper reminds me of my own "we can't run this" moment.

Oddly, it also involved a transvestite.

You have to run a legal a before you change your name. I picked one up a few years back where a man was changing his name to a woman's name. I don't remember the name.

Anyway, it turned out this was a man who divorced his wife, had a sex change operation, became a lesbian and was marrying another woman. I contacted her (the pronoun she preferred) and she and her partner agreed to an interview.

I pitched the story and it was received with enthusiasm. I spent quite a bit of time with the couple and also interviewed one of her kids, several sex-change doctors and another transvestite who lived nearby.

You try finding and cold-calling sex-change doctors and transvestites for an newspaper interview sometime. It's not a quick process.

A transvestite in Macon, Georgia, decides he/she is a lesbian and marries another woman. Yeah, I'll 60 Minutes that puppy right up.