Widespread Panic, why are you still trying to kill me?

The amalgamated schedule is on jambase. It looks like the closest they'll get to Georgia are stops in Charlotte and Raleigh on this swing of the tour:

October 3 is the LSU game in Athens. October 10 is against Tennessee in Knoxville.

Band members should be beaten in the street for their continued disregard of the University of Georgia football schedule. Simply switch the Raleigh and Knoxville shows and add a date at The Landing in Jacksonville for the night before the Florida game and we'll be in business.

UPDATE: I absolutely continue to believe this schedule will continue to be filled in and there will be some crazy show in Georgia.
Posted by Lucid Idiocy at 1:18 PM 4 comments:

Is there anything better than recruiting Joe Montana's son?

In a word, probably not.
Posted by Lucid Idiocy at 10:53 PM No comments:

Build it without doors? Why would you do that?

My disdain for all things yellow aside, they just don't make commercials like this one anymore. The Adventures of Yella Fella, Part 8.

By the way, Great Southern Wood, makers of "Yellow Wood," was apparently begun by the children of an Italian immigrant in about 1971.

In the Spring of 1907, a 29-year-old Italian immigrant named Giuseppe Reina left Cammarata, a small village in Sicily, in search of a better life for his wife and children. His search would bring him to America.

Posted by Lucid Idiocy at 11:14 PM No comments:

The Big House, the Macon home members of The Allman Brothers Band lived in back in the day, will open as a museum in December, according to The Macon Telegraph. 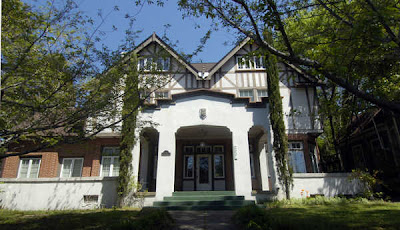 Image via The Telegraph.

Speaking of The Allman Brothers, they just finished a run at the Beacon Theatre in New York, which benefited the museum. Apparently J.B. and Jimmy Herring from Widespread Panic sat in.

Lucid Idiocy Athens Bureau Chief Brian Huff has provided a link to that show on panicstream.
Posted by Lucid Idiocy at 3:26 PM No comments:

This may be the greatest spot news story of all time. From the French Press:

A Thai fireman turned superhero when he dressed up as comic-book character Spider-Man to coax a frightened eight-year-old from a balcony. ...

"I told him Spider-Man is here to rescue you, no monsters are going to attack you and I told him to walk slowly towards me as running could be dangerous," Mr Somchai told local television.

Posted by Lucid Idiocy at 3:00 PM No comments:

Labels: newspapering, the human spirit, things that are awesome

Update your calendars: "Bloodiest war ever" set for Junish

I often wonder whether humankind is as advanced as we think. Or if God's just up there, saying, "Man, I really thought you guys would have figured this out by now."

My buddy Silver* is a "gun show guy." That means he spends his weekends at gun shows, pretty much anywhere within a day's drive, selling people rifle scopes and those little laser pointers that attach to pistols.

This was not his primary career choice. Let's just says he's been a victim of the rapidly un-expanding economy in a particular dying industry.

Now, Silver is a Libertarian. I don't think he has any problem with gun rights. But, not wanting to shoot anything, he doesn't own a gun.

A lot of people think President Barack Obama is going to take away their guns. Or at least make them more expensive. Or maybe give them to Muslim terrorists. I can't really remember what the chain e-mail said.

Some of these fears are obviously unfounded, some of them are probably pretty realistic.

Either way, folks are just buying up guns and over-priced accessories like crazy at these guns hows. You don't have to look hard for news coverage on this. Silver says handguns and assault rifles are particularly popular. When it comes to ammunition, he used the word "stockpiling."

And the people "stockpiling" all this ammunition sound like some real characters.

Silver: I was out having a cigarette and struck up a conversation with this one woman. And she told me, "Well, everything I've read is there's gonna be the bloodiest war ever in June or July."

Silver: Yeah. And I'm just thinking, "What are you reading?"

Silver: This other guy, he was from West Virginia and said he used to work in the coal mines with a bunch of black people. And he said any time black people talk and use their hands, they're lying.

Me: I guess that makes Obama a liar, right?

Silver: I believe that was the sub-text. It's just amazing the panic that's out there.

Me: Just think about this for a minute. All these people that you're meeting — this is America. They have more access to information and education than in just about any place in the world.

As an aside, the way Silver got into this gun show business (which is apparently quite lucrative) is he got laid off. But his boss didn't.

He said that every time he ever had a conversation with her and she meant to use the word "fiscal," she actually said "physical."

Sounds pretty good, too. David Hale's got multiple, if anonymous, sources, quotes Damon Evans as saying nothing is imminent.
Posted by Lucid Idiocy at 10:16 PM 1 comment:

The time to leave a sinking ship is before it sinks, not during the salvage operation

The AJC says Zac Swansey and Troy Brewer want to transfer. I supposed that's to be expected with a coaching staff change.

But this is a little odd:

Swansey lost his starting job to freshman Dustin Ware the last week of January. He said he was more upset about the handling of that demotion than the demotion itself. He said the coaches never sat him down and explained why they were making the move or what he needed to do to try to get his starting spot back.

“There was a lack of communication, big time,” Swansey said.

Yeah, man. Maybe that's one of the reasons we fired those guys.

UPDATE: The Banner Herald says Brewer is staying and Georgia Sports Blog made the same point I made about Swansey, only they made it yesterday.
Posted by Lucid Idiocy at 1:55 PM 3 comments:

I didn't mean to go nine days without posting

The Diamond Dawgs are really, really good. And that's awesome.

They protect an undefeated record Friday night in Tuscaloosa, will be in Atlanta Wednesday and back in Athens March 20 to start a four game home stand.

On the absolute other side of the Bulldog world, this debacle ended today with a 19-point loss.
Posted by Lucid Idiocy at 8:32 PM No comments:

Sanford, as silver as I've ever seen her

Someone sent this to me over the Internets. If you took it, please let me know.