It's kind of like watching Rock n' Roll realize it doesn't have to crawl anymore, it can walk.

Hale: Richt to be more involved in offense

Richt said he has sat in on every offensive team meeting and quarterback meeting this spring, and he’ll continue to do so throughout the season after taking a more reduced role during the past several years.

Posted by Lucid Idiocy at 11:21 AM No comments:

This is how I feel about Georgia tech

I don't know who drew it, but there's a print of this cartoon hanging in Marlow's Tavern on La Vista Road in Atlanta. 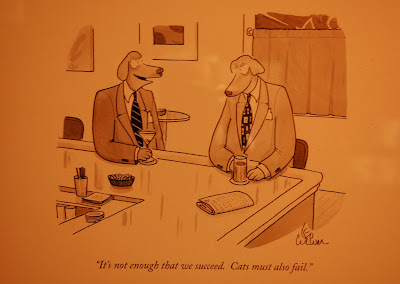 I like everything about that. The sentiment, the look on the dogs' faces, the fact that they're wearing suits, everything.
Posted by Lucid Idiocy at 10:36 PM 1 comment:

There's a good life lesson in the crack down on North Campus tailgating. When you know someone wants to hit you on the head, don't hand them a hammer.

Beyond that, this is the university's definition of North Campus, and an interesting reference to parking changes from UGA's official game day sit:

In order to accommodate the increased fan traffic in these areas, a few changes in parking regulations are also being implemented at locations throughout the campus. These changes will help to free up valuable parking spaces to accommodate the more than 92,000 fans that gather on campus during a gameday.

If you have the means, now is the time to bargain with the powers that be on tailgating. Surely there is a solution beyond a complete North Campus lock down.
Posted by Lucid Idiocy at 6:10 PM 1 comment:

Labels: tailgating: not for the faint-hearted, The University of Georgia

Coming to Logan Gray's defense against a blogger. Great. Good habit to get into. Couldn't possibly backfire.
Posted by Lucid Idiocy at 12:15 PM 2 comments:

Georgia basketball: Not so much better, as hopeful

It seems people are generally positive about the future of Georgia basketball, and I suppose I agree.

But, boy, the product on the floor this year was chock full of problems. Weak on rebounding**, weak on defense, weak on getting the ball down low.

Unable to put folks away, unable to win on the road and unable to focus, it seemed at times. Just generally weak, but with great dunking. 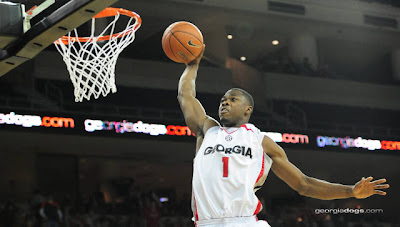 Update from the comments (anonymous):

We went from a completely uncompetitive team last year to a team that was in almost every game we played this year. Yes, we lost a lot of close games, but you don't learn how to win those types of games, especially on the road, in just one season at a program that has been inept as Georgia's has in recent years. ...

Don't know where you get your comments about rebounding and getting the ball down low. I'm guessing you just watched a few games and decided now wasn't quite the right time to jump on the bandwagon. We were one of the better rebounding teams in the conference and our offensive execution was night and day compared to last year. We pretty much got any shot we wanted. ...

If we can keep Fox around for 10+ years, I promise you this program will finally start to reach the enormous potential that it has always had.

Hey, I didn't say I wasn't hopeful, I said I wasn't impressed.

**But the commenter is correct, Georgia was No. 2 in the SEC in rebound margin and No. 1 in defensive rebounding, if No. 7 in offensive rebounding, per secsports.com. I am quite honestly shocked by that.
Posted by Lucid Idiocy at 3:59 PM 8 comments:

Preservationist and Georgia native, dead at 103

Dr. Edgar Wayburn was a native of Macon, Georgia. From the San Francisco Chronicle:

Dr. Wayburn went on to devote his life to preserving such natural wonders - a pursuit that led him to serve five terms as the president of the Sierra Club. He remained an honorary president when he died Friday night in his San Francisco home at age 103, surrounded by family.

"He has saved more of our wilderness than any other person alive," President Bill Clinton said in 1999 when he awarded Dr. Wayburn the Presidential Medal of Freedom, the nation's highest civilian honor.

Labels: badasses, the environment, the great state of Georgia

Look at the "single digit wins" statistic in this picture of live television from like 10 minutes ago. That is a "0" for the current UCONN women's basketball streak. 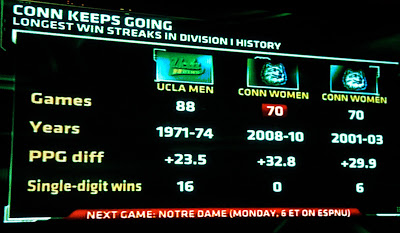 Yes, I took a picture of ESPN.

If that is correct, that is beyond PlayStationesque.
Posted by Lucid Idiocy at 7:24 PM 2 comments:

Labels: things that are completely dominant 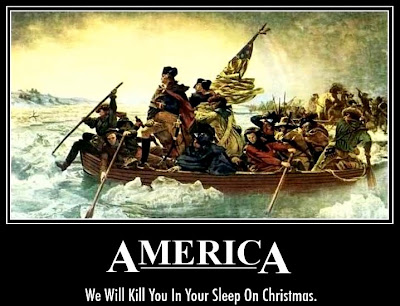 To be fair, they probably weren't all asleep when we killed them.

Pretty sure this came from this site.
Posted by Lucid Idiocy at 4:14 PM No comments:

Nick Saban: I would rather not have known

Stuff like this is why they have that phrase, "Shoot the messenger."

The University of Alabama football coaching staff is raiding the state of Georgia for top recruits for the class of 2011.

The AJC linked to this with the headline: Alabama's Nick Saban has made Georgia his primary out-of-state target for football recruiting.
Posted by Lucid Idiocy at 8:56 PM 4 comments:

David Hale has linked to this site, which is building a database of NFL combine numbers.