At some point last season, no doubt with help from my friend alcohol, I started working on football lineup made up only of movie characters. I stumbled across it recently, and, voila.

Please note: These characters have to be human, at least in the movie sense. You start putting Superman at running back and the Rancor monster at defensive end and this whole exercise gets ridiculous.

Quarterback: Capt. James T. Kirk. Fearless. Leader. Bangs green chicks. So he's got the arm and the intangibles. Back up quarterback: John Wayne, for when we run the option.

Running back: Indiana Jones. He may not be the fastest guy on the field, but he's undefeated versus Nazis, may be immortal, seldom fumbles and is damn sure hard to tackle. You could also go with Han Solo here. I understand he made the Kessel Run in under 12 parsecs.

Fullback: John Rambo. A kid on a tricycle could run behind him.

Flanker (WR): A.J. Green. I'm sure he'll be in a movie eventually. Also, I think the Batman movies are loosely based on his life.

Split End (WR): Roger Moore's James Bond. Deceptive speed/dry wit. Nobody does it better. When we go three-wide, I bring in Capt. Jack Sparrow from the Pirates of the Caribbean movies. He is the Wes Welker of movie characters, if Wes Welker was an insane nonexistent pirate. Point is, the guy gets open.

Tight End: Liam Neeson's character from Taken. As an aside, have you noticed that Liam Neeson's entire career these days is based on killing people/wolves with his bare hands? What ever happened to Schindler's List? Also, dude's like 6' 4".

Left Tackle: Any Steven Segal character. They're all the same, they're always knocking people down and, these days, the guy weighs like 300 pounds. Second stinger when fat boy tires out: Jaws. He'd probably start, except I feel like his tendency to bite people to death would lead to penalties.

My name is John Fain and I am 3 weeks old today. I know you're a busy man, particularly with your new-and-improved mat drills and several important hires to make - so I'll get straight to the point.

When is the proper time for Daddy to start me on a self-improvement regimen of kettle bells and punches to the face? Five weeks? Six?

I don't want to wait too long and turn into a whiny little punk. 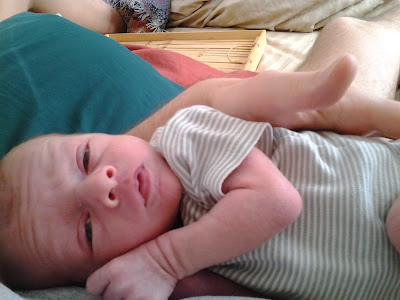