"You were all true heroes"

I'm a reporter for The Macon Telegraph, currently assigned to cover the Georgia General Assembly in Atlanta.

Today I happened upon a ceremony in the north wing of the State Capitol. World War II veterans were receiving the Legion of Honor from the French Consulate, which has its southeastern US headquarters in Atlanta.

The medal is the highest honor of France, and the French ambassador thanked these men for their service.

"You were all true heroes," he said, "who were there when hope was disappearing."

I cannot here do justice to their stories. But I will list their names, from a press release by the French Consulate:

Veterans Crawford Ferguson from Charlotte, N.C. (8th Air Force), Leonard A. Gardner from Myrtle Beach, S.C. (90th Infantry Division), Ken L. Faulkner from Birmingham, Ala. (137th Infantry), Willie E. Lambert from Dawsonville, Georgia (320th Infantry), Robert P. Mechling from Brentwood, Tenn. (8th Air Force), James L. Miller from Byhalia, Miss. (27th Armored Infantry Battalion), and Marsh C. Pickett from Greenwood, Miss. (18th Corps Artillery), have confirmed their presence. Also, James Brothers from Elisabeth City, N.C. (104th Infantry) will be represented by a family member. They will receive this reward in recognition for their courage. Among their many heroic deeds, they participated in the Normandy landings, which were decisive in the liberation of France. 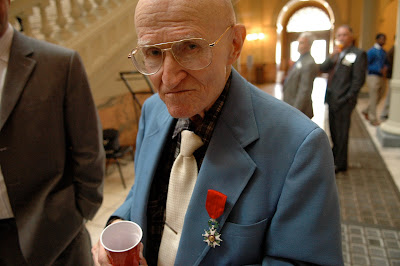 Da'Rick Rogers on his recent visit to Tennessee, from The AJC:

Rogers reported that he was very impressed with new coach Derek Dooley, his coaching assemblage and, of course, the Volunteers’ football program.

Posted by Lucid Idiocy at 3:46 PM No comments:

I can't decide if this is awesome, or a debacle.

The above link is to ESPN. This is rom Deadspin:

Why this kid would cover himself in PB became crystal clear as the seconds on the clocked ticked down and UGA was about to wrap up its first win vs. a top 10 team at home since the Jim Harrick era. The students were reminded to NOT rush the court. ... As he rushed the court there wasn't a security guard or police officer willing to go anywhere near this kid.

Labels: lucid idiocy, The Dawgs, things that are just ridiculous

It's generally better than anything you can put it on. Everything in life should be so easy.


Also, the new Chili Lime sauce, which I'm pretty sure you can just drink right out of the bottle.
Posted by Lucid Idiocy at 9:46 AM 5 comments:

Derek Dooley, if you steal Da'Rick Rogers, we're going to have problems

AJC: Da'Rick Rogers, Nash Nance to visit Knoxville.
Posted by Lucid Idiocy at 11:59 AM No comments:

Orson Charles for outside linebacker

Still excited enough about Todd Grantham and the 3-4 to be rereading teleconference notes - > me.

Grantham on his message to recruits:

Posted by Lucid Idiocy at 10:01 PM No comments:

The situation in Haiti

Obviously you don't need me to tell you about the situation in Haiti right now.

But I happened a February 2009 copy of The Economist, with this article about the situation then:

THERE is a new lake outside Gonaïves, a town of 300,000 people and the fourth-largest in Haiti. It blocks the road south to the capital, Port-au-Prince. It formed last autumn when four storms, three of them hurricanes, swept over the poorest country in the Americas in the space of a month. The rain—a metre’s worth on one night alone—fell on saturated mountains, long since denuded of their forest cover, and swept down on to the coastal plain. It seemed a modest victory that only 793 people died, compared with 3,000 killed by Hurricane Jeanne in 2004.

Five months later, bulldozers have cleared the mud from the main streets of Gonaïves. Away from them, on countless side streets, pedestrians look down on rooftops on either side. The houses have been dug out by hand, and the dirt piled in mounds on the roadway.

Only 20% of the town has been cleaned up, estimates Olivier Le Guillou of Action Contre la Faim, a French charity, which has paid 1,800 residents to help do the job. The damage was not confined to Gonaïves. Haiti’s agriculture minister reckons that 60% of the harvest was lost and 160,000 goats were killed, along with 60,000 pigs and 25,000 cows. In all, the storms have cost the country $900m, or 14.6% of GDP, according to a donor-funded government study. That is equivalent to 12 times the damage of Hurricane Katrina in the United States, and comes just four years after Jeanne wiped out 7% of Haiti’s GDP.

You must subscribe to read the whole article. Perhaps the people at The Economist will not complain if you simply buy a newstand copy of their magazine soon instead, or donate something to relief or rebuilding efforts in Haiti.

It strikes me that in Georgia, Gov. Sonny Perdue called this week for an extra $300 million a year for transportation projects, for the next 10 years.

If just one of those years were spent on Haiti, you would sit in roughly the same metro Atlanta traffic for a marginally longer period of time, and an area of Port-au-Prince could be rebuilt, probably by Georgia companies.

I'm not saying, I'm saying that's an amazing difference in living conditions for the span of 800 miles. This earthquake has the potential to be a real call for positive change in Haiti.
Posted by Lucid Idiocy at 12:45 PM No comments:

The 3-4 comes to Georgia

The bottom line before I read up on Coach Todd Grantham coming to Georgia was that this was Richt's choice.

After reading a bit some of Coach Grantham's comments, I'm excited, even though I doubt we have the personel right now to run a really good 3-4 defense. But we need linebackers, period.

From David Hale for The Telgraph: 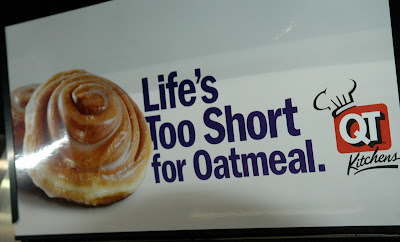 This Lane Kiffin situation has been a laugh riot for the most part. But if it ends with Tennessee actually hiring Will Muschamp, I'm going to be super pissed.

Media: Is it a fair question for people to wonder if you're a good head coach?

Kiffin: We blew out Georgia.

Posted by Lucid Idiocy at 9:53 PM No comments:

Man, I hate to see you go. You have been the man.

And the 2010 defensive depth chart takes another major hit.
Posted by Lucid Idiocy at 9:47 PM 3 comments:

Orson Charles for all positions

Why stop at Richard Samuel?

If I could I would play Orson Charles at defensive end, linebacker and tight end, all at the same time. And possibly the wildcat.

Coach Richt is probably not going to do that. Is it time for Bruce Figgins, listed at 260 pounds, or Arthur Lynch at 250, to play some defensive line?

Joe: And Logan Gray for scout team qb.
Posted by Lucid Idiocy at 6:03 PM No comments:

For it's promotional commercial during the Orange Bowl, Georgia tech chose to highlight, on national television, the fact that it runs a tricycle race every year. 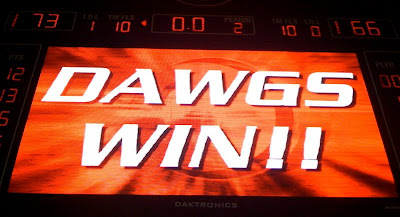 Near the end of the radio broadcast, Scott Howard said the Hoop Dawgs haven't lost to Georgia tech in Athens since 1976. Considering the last decade or so of Georgia basketball, that's pretty staggering.

11:55 Update: Highlights from this game were just the No. 10, 5 and 2 top plays on ESPN. To be fair, though, only numbers five and two highlighted Travis Leslie.

Labels: basketball, From the athens bureau, The Dawgs, things that are awesome

Samuel, Jones and the 2010 depth chart

Richard Samuel, not moving to linebacker? C'mon, man. Not only are you a linebacker, you are a 2010 starting linebacker.

Reshad Jones is headed to the NFL. I wish you luck Reshad, by which I mean I hope none of the NFL scouts discover any tape of you tackling prior to 2009.

Mr. Jones' departure leaves us with a depth issue at safety. Quintin Banks has been injured for most of his career at Georgia, which is a shame because I had high hopes for him.

Bacarri Rambo is solid at one safety spot. Then you've got Sanders Commings and Makiri Pugh, assuming neither plays cornerback, which is no guarantee given our issues there.

This out-of-date depth chart lists few other options. John Knox transferred to GMC earlier this year. It would be nice to get him back, though if I remember the tenor when he left, I'm not betting on it.

Then there's incoming freshman Alec Ogletree (video), our most exciting safety recruit since Reshad Jones, if you discount the fact that Bacarri Rambo's name is Bacarri Rambo.

I think we've had some recruiting misses at linebacker. We seem to have some studs coming up at defensive tackle, but they will be young. We're losing five tackles, three of whom will probably play in the NFL.

The secondary could have a real addition by subtraction feel to it, but that's nothing to bank on. Throw in the fact that we'll be breaking in new coaches, and maybe a new system, and there are easily more questions on the 2010 defense than any time I can remember in the Richt era.

Update: Good point in the comments - "We have JuCo All American Safety Jakar Hamilton coming in too." Excellent.
Posted by Lucid Idiocy at 12:26 PM 7 comments: