G.I. Joe: The other half of the battle

All those years watching cartoons, and it never occurred to me to ask "What's the other half of the battle?"

But the answer makes sense. 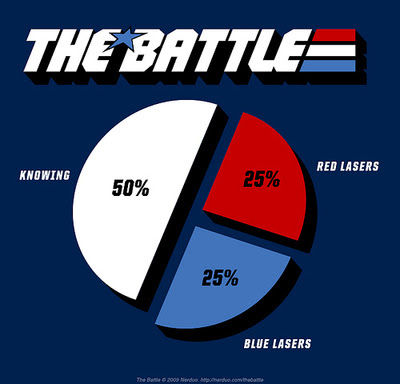 If kind-of-witty nerd t-shirts are your thing, you can buy this one here. Hat tip: Words Tumbl Down.
Posted by Lucid Idiocy at 3:37 PM 1 comment:

Labels: things that are pretty cool

This is easily my favorite part of the story:

McMackin made his comments in front of about a dozen reporters, most with voice recorders, and a WAC video camera. He then tried to convince reporters not to write about his comments.

“Just please … cover for me,” McMackin said Thursday. “Go ahead, say ‘faggot dance.’ No. Please cover for me on that, too — right Karl? I’ll deny it. Anything else?”

Karl referred to WAC commissioner Karl Benson, who was in the room when McMackin concluded his comments.

You'd have to set up chart with subtypes to categorize all that stupidity.
Posted by Lucid Idiocy at 2:14 PM 1 comment:

Labels: all morons hate it when you call them a moron, my ridiculous fued with Hawaii

This is from an animal control official here in Macon, where shelter workers have been nursing a kitten back to health after children, now in custody, apparently held it down and set in on fire:

“I’ve been here 10 years now. Some cases are harder than others,” she said. “You go home, you cry, you say a prayer, and you come back and do the best you can.”

Good advice on every hard day.
Posted by Lucid Idiocy at 11:57 AM No comments:

This ad is as dumb as anything I've seen in a while, and I've been in a third world country for the last two weeks.

Posted by Lucid Idiocy at 11:12 PM No comments:

Walter Cronkite, quite possibly the greatest T.V. newsman of all time, and certainly the most famous, has died.

I don´t have much to add, except that it was important enough for me to seek out an internet connection on a tropical island.

His obituary in The New York Times

Walter Leland Cronkite Jr. was born on Nov. 4, 1916, in St. Joseph, Mo., the son of Walter Leland Cronkite Sr., a dentist, and the former Helen Lena Fritsche. His ancestors had settled in New Amsterdam, the Dutch colony that became New York. As a boy, Walter peddled magazines door to door and hawked newspapers. As a teenager, after the family had moved to Houston, he got a job with The Houston Post as a copy boy and cub reporter. At the same time, he had a paper route delivering The Post to his neighbors.

“As far as I know, there were no other journalists delivering the morning paper with their own compositions inside,” he wrote in his autobiography.

When he was 16, Mr. Cronkite went with friends to Chicago for the 1933 World’s Fair. He volunteered to help demonstrate an experimental version of television.

“I could honestly say to all of my colleagues, ‘I was in television long before you were,’ ” he said in an interview with CBS News in 1996.

Posted by Lucid Idiocy at 10:39 AM No comments:

A town in rural Australia has banned the sale of bottled water. I doubt that would fly in the U.S., where we're not big on banning people out of business... with a few exceptions.

But if I owned stock in a bottled water company, I'd pay attention to this:New South Wales Premier Nathan Rees has backed the cause, ordering government departments to stop buying bottled water and use tap water instead.Given the environmental impact of pouring 16 onces of water into individual bottles made from petroleum, the cost of bottled water, and the current economic situation, that could absolutely happen here.
Posted by Lucid Idiocy at 12:36 PM No comments:

Tanner Strickland out for 2009. From The Red and Black.
Posted by Lucid Idiocy at 11:32 AM No comments:

There is but a single survivor

From The New York Times on July 1:

PARIS — When rescuers saw Bahia Bakari, 14 years old, she was clinging to wreckage in rough seas, surrounded by floating corpses and debris from the Yemeni airliner that crashed Tuesday off the island nation of Comoros.

On Wednesday evening, Bahia — hospitalized and suffering from scratches, bruises and at least one fracture — was asking for her mother, who had been on the same flight, according to an uncle who had seen the girl. He said he told her, for now, that her mother was in the next room.

But in an almost miraculous tale of luck and endurance, Bahia is apparently the only survivor of an air disaster that left all 152 other people on board dead.

Is this a miracle, a tragedy, or both?
Posted by Lucid Idiocy at 11:10 AM No comments:

Michael Jackson is not dead

After years of thinking they're simply crazy, I finally understand the people who have believed for so long that Elvis is alive.

Because my generation's Elvis is dead. That he was quite likely a child molester, most certainly abused as a child himself and pretty clearly disturbed is sad, but not particularly relevant here.

It's like an immortal has died, and there's no explanation for that.

It actually seems more likely to me that he has faked his death. That the body that will be buried where ever it will be buried is some sort of human clone. Or that one of his children is a clone, and on June 25 he managed to transfer his soul into a new body.

It stretches the mind to think that Michael Jackson could go out on anything but his own terms, however deluded they might be.

UPDATE: The theory has nearly gone mainstream, as was inevitable. From The (UK) Telegraph:

"He was talking about the prospect of being cloned. He grabbed Uri by both arms and told him, 'I really want to do it Uri, and I don't care how much it costs'."

Labels: lucid idiocy, perhaps I am taking this a bit too seriously

The age and the whiskey are taking their toll

You know that saying, "This ain't my first rodeo"?

I like that line. But I don't think I remember my first rodeo anymore.
Posted by Lucid Idiocy at 11:17 PM 3 comments: 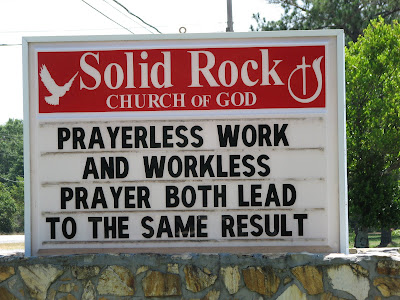 Solid Rock: Also a song by Bob Dylan.
Posted by Lucid Idiocy at 1:42 PM No comments: