Not only does "do they have a hot wife or not" strike me as a poor metric to use in hiring your football staff, I'm not sure I'd classify most of the wives in Vanderbilt's football media guide (pdf) as hot.
Posted by Lucid Idiocy at 3:28 PM 3 comments:

Craig "Sky" Hertwig, the towering man who was an All American offensive tackle for the University of Georgia in 1974 and became a well-known character in the tapestry of downtown Athens, has died.

He was 60, according to The Atlanta Journal-Constitution. 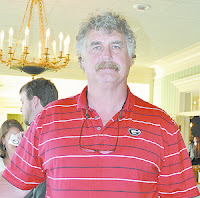 Sky owned the iconic Nowhere Bar on Lumpkin Street, catty-corner from the Georgia Theatre. Before that he owned the Fifth Quarter and Sky's Place, which, for my generation, was the diviest dive bar in a town of dive bars.

Sky lettered for the Bulldogs in 1972, '73 and '74 and served as an offensive captain. He played several seasons for the Detroit Lions and had a role in the film "North Dallas 40," the 1979 classic about the pain and wonder of NFL football.

Sky was proud to be a Georgia Bulldog, and he was faithful. He took a series of older model RV's, and at least one red and black limo, to road games. I know for a fact that one of his RV's burned to its frame on the side of a highway headed into Lexington, because we saw him there and stopped.

He got in the car, rode with us to Lexington, paid for our hotel rooms and went about the very normal business of beating Kentucky.

Sky was a kind man, but different, and his size set him apart. He was 6'8", according to various reports, and surely far north of 300 pounds after his playing days. I think some people were uneasy around him, and I often thought of what that must of meant in his life.

I will miss the simple knowledge that, should I go to Athens, I can count on seeing Sky. He was as much the city for me as any number of landmarks, and I expect I'm not the only one who feels the town lessened for his passing.

I saw a simple, anonymous and perfect short story about Sky on Twitter as news of his death spread. Some guy said he broke a pool cue in Nowhere Bar.

"Sky put his giant hand on my shoulder," he wrote, "and told me shit happens in pool halls."

That was some of Sky. Friend to the students. Gentle giant. Georgia Bulldog from coat to core. He was a good man, and he is gone too soon.

Image: Bulldawgs Illustrated.
Posted by Lucid Idiocy at 12:35 AM 4 comments:

Damn I love football players with awesome names.
Posted by Lucid Idiocy at 11:00 PM No comments: