Well, there you go

I doubt many of you had Georgia advancing too far in your brackets, so we can't really get upset about being bounced from the tournament. Or can we...

Time to blame the refs. And possibly President Bush.

By the way, The Telegraph sent a reporter to D.C. to cover the game. He flew in this morning and plans to fly out tonight. That's right, no overnight stay.

So it's safe to say we weren't expecting the Dawgs to make a run. Congrats, though, gentlemen on an exciting few days. We'll always have the 2008 SEC Tournament.

As another writer here said, "What were the odds of that last week?"

Since it will probably cycle off the front page soon, I'm swiping the picture. I hope The Times won't mind too much. 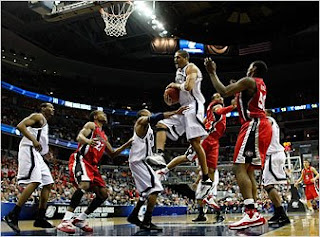 The Georgia senior guard Sundiata Gaines was the last Bulldog player off the floor. He hung his head low, but had nothing to be ashamed of. He vacuumed up every loose ball, led with a veteran’s aplomb and epitomized the fight this Georgia team had shown for the last week.
Posted by Lucid Idiocy at 3:17 PM

Labels: The Dawgs, things that are pretty cool

Hello. This post is likeable, and your blog is very interesting, congratulations :-). I will add in my blogroll =). If possible gives a last there on my blog, it is about the Monitor de LCD, I hope you enjoy. The address is http://monitor-de-lcd.blogspot.com. A hug.

I had them winning in the first round, so they did mess up my bracket a little. I am still proud of them though, they showed heart and represented the University well.