Vic Chesnutt is your Daddy.

This post is not going to be for everyone. In fact, if you said "Vic Who?," maybe just stop right now before your soul explodes...

A buddy of mine and I got drunk one night and wrote this list, stealing liberally from the greatest concept ever born upon the Internet.

My sincere hope is that it does not anger Mr. Chesnutt.

Vic Chesnutt wanted to fight the war on terror, but realized he could not defeat himself.

On the 8th day God ran away from Vic Chesnutt. Screaming.

Satan is a Vic Chesnuttist.

Vic Chesnutt lights his cigarettes on himself.

Vic Chesnutt killed Vince Dooley in 1979 and assumed his form.

Vic Chesnutt knows what you did last summer because he made you do it.

Metallica's "One" is about Vic Chesnutt... when he was a fetus.

You think Kurt Cobain killed himself? You're a moron.

The moon doesn't cause the tides to change. Trust us.

The word "shotgun" is loosely based on the Latin for "Vic Chesnutt."

You can stop Vic Chesnutt, but you have to find him first. Check Hell.

The bullet that killed Bruce Lee was Vic Chesnutt. That's the only way it was gonna happen.

Vic Chesnutt stabbed Sting in the neck in 1992, then nursed him back to health and stabbed him in the skull. This is known as "Tantra."

Vic Chesnutt has no soul and cannot be photographed.

Vic Chesnutt kills people who put an extra "T" in his name. With the letter "T."

You should see the ones I edited out because they were in "poor taste."

Even if it kills you, I'm not sure it's possible for this to be too loud
: Soon I will be lighter fluid. 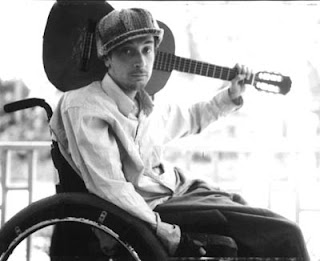 Image: Rolling Stone.
Posted by Lucid Idiocy at 9:39 AM