It really was "the perfect option."

Think about that for a minute.

I have a confession to make: This loss to tech doesn't bother me that much.

Oh, I mean, it bothers me. But I knew we didn't have the fortitude to break something like that drought record. That's too much mojo for now.

“I really don’t (expect coaching changes),” Richt said. “We’re going to get better, and we’re going to do a better job next year, I can promise you that.”

Good enough for me. I suggest you address the not tackling first, if I may be so bold.

What's that you say? “I’m not sure we tackled enough,” Richt said. Agreed.

Congratulations to Georgia tech. They deserved it and they beat us.


We interrupt this post for additional recovery through music.

I have heard some say that the crowd was unimpressive. I might say uninspired. At times, given the size of the crowd, the rain, and the noon kickoff, I thought there was good participation.

But perhaps we grew disinterested, too. To me, it felt like the expected simply coming true, despite a very well-played first half. We should be glad Florida wasn't there.

Somebody needs to kick that attitude in the face. 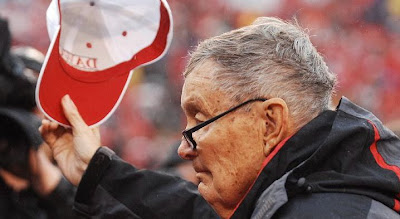 The Munson honoring went very well. There were so many cameras down there I couldn't believe they all could get a shot. Larry seemed much more than pleased. Did we force a tear out of that guy? That'd be something. I was surprised they tried to do a Dooley ceremony at halftime.

How awesome was that Knowshon-is-going-score-no-matter-what touchdown?

How many tackles did Rennie Curran have? Elleven. He led the team, obviously.

Massaquoi had 11 catches for 180 yards and three touchdowns. Knowshon got 17 carries for 94 yards after an on-fire opening. He caught 4 balls for 74 yards. The team rushed for 81 yards total. Tech attempted 0 passes in the second half.
Image: Jason Vorhees, The Telegraph.

For those wondering, we pick up Arkansas, at Arkansas, next year from the west. LSU comes to Athens. That opener at Okie State looks like a potential doozy.

There's a bye week before the Florida game and we play Tennessee Tech before the Auburn game, which is at home.

I saw on ESPN that Texas overtook Michigan (CORRECTION: I meant Notre Dame) on the all-time wins list on Thursday.

This was the top 10 before the 2008 season started, according to Wikipedia. Our media guide has us 11th on the list with 693 before this season started.
Posted by Lucid Idiocy at 10:05 PM

I agree with most of what you say. Maybe it will serve a purpose, who knows? I'd love to see all our talent back. But everyone is thinking this and no one is saying it ... Martinez? What exactly will stand in the way of his ass and the door? I was there and I participated very well from sec. 131 under the overhang, thank you. This was not the fans' fault.

I think that Texas overtook Notre Dame on the all-time wins list. Michigan is still about 50 games up on everyone.

Nice music choice. Been a while since I've heard that version. You should check out Clapton's version of Love Minus Zero/No Limit from that show if you can find it.

Is the photographer's name really Jason Voorhees, like Jason from Friday the 13th?