The Georgia Theatre is on fire

1340 in Athens reports the Georgia Theatre is on fire this morning, with "as many as 4 ladder trucks" on the scene.

Nothing online at The Banner Herald or The Red and Black.

UPDATE: The Athens-Clarke County Fire Department confirms it: The Georgia Theatre is burning.

UPDATE: As the commenter notes, The AJC is up with a story. They have a contributed picture on the home page showing a ton of smoke.

UPDATE: Athens Bureau Chief Brian Huff has arranged for pictures. The phrase "total loss" is being used a lot, and I think you can see why. 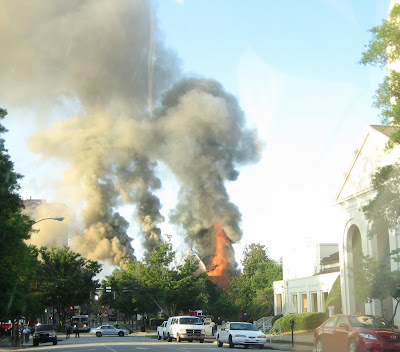 They have the fire under control but they are still hosing it down. You can see smoke from Milledge and the downtown area is fairly smoky. Lots of people hanging out on street corners and parking lots. Building is still standing. I will send pics out later today.

It looks like WSB TV in Atlanta sent their chopper to shoot the fire. They have several pictures. The Banner-Herald has a story up now. Apparently the fire knocked out power downtown, including at the paper.

Final update on this post: The Banner Herald spoke to the owner. He plans to rebuild, and there's some speculation as to the cause.

Fox 5 got an excellent view of the now-gone roof from their chopper, as seen in this video embedded at Fresh Loaf.
Posted by Lucid Idiocy at 8:02 AM

Labels: athens, From the athens bureau, music, the georgia theatre, things that suck

At least the AJC is on top of things...

Good job of keeping us up to date. More pictures would be clutch...

rebuild it and they will come.

Correspondent Jean Okeefe...HA! What comes next, an update on the temperature from weatherman, Brian Huff?