Would have loved to title this post "Aaron Murray is made of Iron."

I actually think he might be made of that stuff Robert Patrick's character was made of in Terminator 2.

But I went with a Rocky IV reference, even though I think Aaron's first half strategy was more along the lines of the second Clubber Lang fight in Rocky III. As an aside, A.J. Green is probably made of dark matter, but Cam Newton is made of gravity, and gravity always works.

Auburn was the better team and won the football game. If we're drafting Qbs from an all-time pool in the SEC, chances are I'm taking Cam Newton and you can have Peyton Manning.

Now, repeatedly Saturday Nick Fairley led with his helmet and speared Aaron Murray, often after the ball had been thrown. Aaron changed his jersey at one point, to get the blood off it. 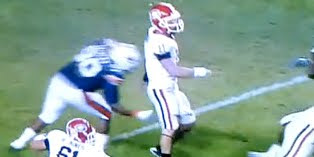 And yet, of Murray and Fairley, I only saw one of those guys leave the field with an injury while the game was in doubt, and it wasn't Aaron Murray.


Except there's a second half. 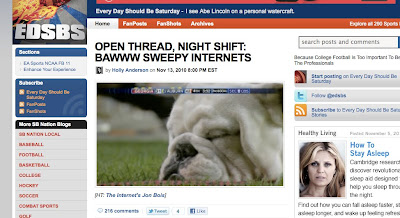 Actual ad for staying asleep on this page.


We lost ... an Auburn game. And I feel better about a defense that gave up 49 points tonight than I have about the defense all season long.
Posted by Lucid Idiocy at 9:45 PM